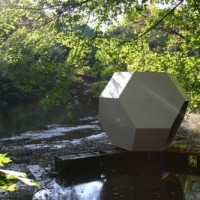 Alex Young has recently moved back to NYC from post-industrial upstate New York towns Troy and Buffalo. In conjunction with the Conflux Festival 2012, Young will be creating a site-specific project (which we learn more about in a couple of weeks). Beforehand, I wanted to highlight his practice and a few of his recent works. Alex Young is an artist, curator and writer exploring the built environment and experimental historiography.

His 2011 project, The Center for Utopian Socialist Studies (C.U.S.S.) is a floating headquarters on the base of a waterfall on the Wyantskill River in Troy- the same river which once fueled the Burden Iron Works’ waterwheel. Young also states that the waterwheel was the world’s largest of its time and was the primary influence on the invention of the Ferris Wheel. The Ferris Wheel was also the main influence for King Gillette’s 1984 conception of Metropolis, another huge focus of Young’s work and research.  C.U.S.S. serves as both an avatar for his Worldshaving project and also as a functional reading room containing literature related to the formation of utopian social communities. This small, hidden base looks at narratives that create a sense of place, city, and industry. 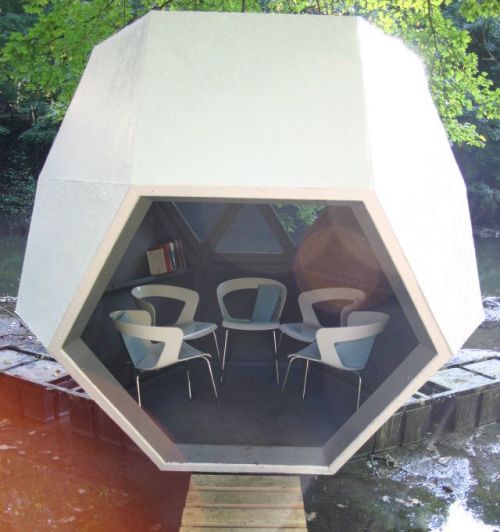 In addition to highlighting Alex Young’s off-site project happening during the weekend of Conflux, we are excited to be exhibiting documentation from his Site of Metropolis: Past/ Future, Present/ Future project completed in Buffalo, NY in 2010. The vinyl mesh banners shown below were installed along chain link fences throughout Buffalo- implying the future construction of King Camp Gillette’s 1984 vision of a single-world-city grid of towering apartment buildings powered by Niagara Falls.  Looking forward to checking them out at Conflux 2012! 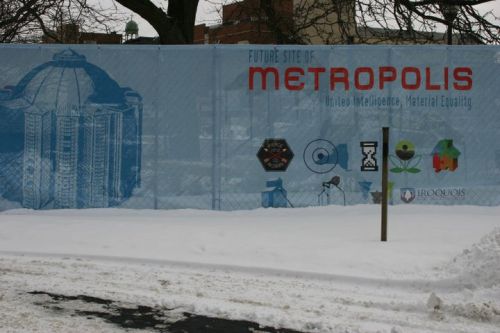 View all posts by Angela Washko →