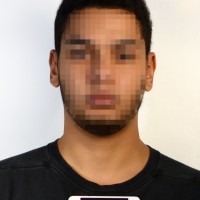 By admin on October 13, 2012 in 2012 Blog, Participants
As we count down to the opening of the Conflux Festival 2012, we’re very excited to announce that we’ll be presenting a project this year happening simultaneously offsite in Miami and inside our base at NYU’s Barney Building Gallery in New York City!
As part of the 2012 Conflux Festival, the new media duo Art404 will be performing 1 Man 1 Phone, an ongoing performance set to begin with the start of the Festival on Saturday, October 20th. As the festival launches, Manuel Palou of Art404 will begin a new life as partner Moises Sanabria curates how it is received by the audience at NYU.  Palou will be activating a new smart phone with a new number and charging it to 100%, at which point he will leave his home in Miami with nothing but the clothes on his back and a phone charger. Using a new Twitter account, he will attempt to receive meals, housing and entertainment strictly by contacting local people in the Miami area through the social media service. Palou will not contact any previously known contacts except his partner in New York until the end of the performance. The performance will continue until Palou’s battery dies naturally, or he chooses to let his battery die.

We hope that you’ll follow the performance starting 12pm October 20th at https://twitter.com/1man1phone